What is Climate Change?

Climate Change (also known as Global Warming) is the name given to long term changes to temperature on and around the Earth’s surface, which causes long term shifts to weather patterns.

Climate Change isn't limited to one region, it impacts the whole of the Earth. It is causing polar ice sheets and glaciers to melt; and sea levels to rise. Extreme weather events such as typhoons and hurricanes are becoming more common in some regions of the world, while others regions experience more punishing droughts and heat waves.

The warmer ocean surface temperatures impact corals and alter coral reef communities by prompting coral bleaching events and altering ocean chemistry. These impacts affect corals and the many organisms that use coral reefs as habitat.

In 2014, The Intergovernmental Panel on Climate Change (IPPC) published the 5th Assessment report on climate change based on long-term scientific evidence. This stated that the increase in greenhouse gas (GHG) concentrations (namely carbon dioxide (CO2), methane (CH4), nitrous oxide (N2O), hydrofluorocarbons (HFCs), perfluorocarbons (PFCs), and sulphur hexafluoride (SF6) over the past 100 years has predominantly been caused by human activities.

How do Greenhouse gases (GHG)s change the temperature?

GHGs are able to absorb long wave radiation (heat) that is reflected off the Earth’s surface. They are then able to reemit this radiation back down to Earth. If there were no GHGs in our atmosphere the Earth would be too cold for life as we know it to exist. However, as more fossil fuels, are burnt and other GHGs are released, the atmosphere is able to absorb more radiation and so is warming up. This is known as the greenhouse effect.

What are Largest Sources of GHGs?

GHG emissions come from a range of human activities including electricity generation, industrial process and transportation. Currently electricity and transport represent the largest sources of emissions and greatest opportunity for saving 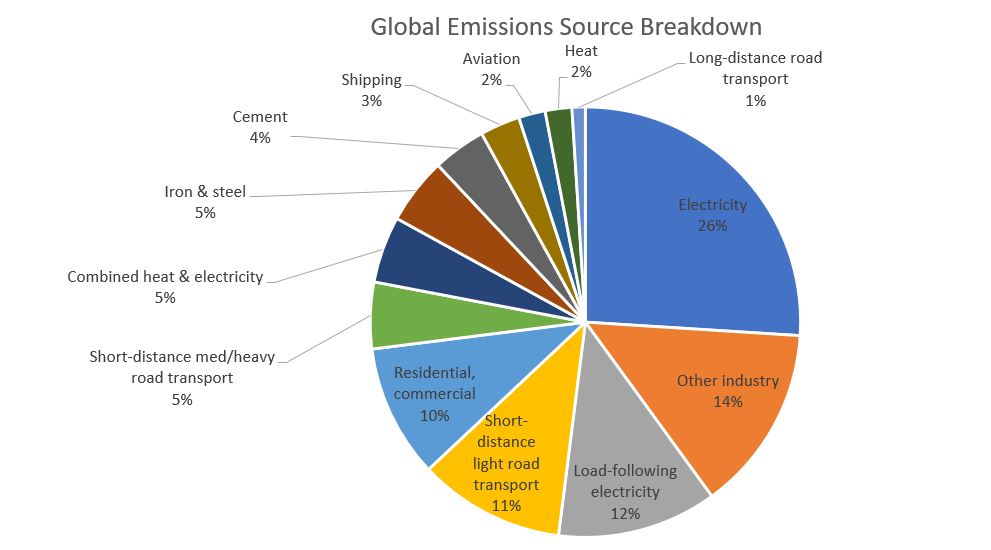 The Importance of 1.5⁰C Temperature Rise

The global temperature has risen significantly since the Industrial Revolution and particularly steeply over the past 40 years., with increasingly levels of human activity.

The Intergovernmental Panel on Climate Change (IPCC) has voiced that if the temperature rise can be held to below 1.5⁰C, then the irreversible effects of climate change can be avoided. Above this level there will be highly significant and permanent changes to our environment and biodiversity.

What Difference does the COVID-19 Pandemic Make?

Over recent times, the COVID-19 lockdown has caused an unprecedented change in global behaviours, including massive reductions in transport and electricity use. The IPCC forecast a 6% drop in energy use, leading to 4-8% anticipated reduction in CO2 emissions. Whilst this reduction (this year) is consistent with keeping the temperature rise to 1.5C, the same drop is required every year (until 2050) to assure that our planet remains under that threshold.


What evidence is there that CO2 levels are increasing?

By comparison CO2 emissions, in the past 800,000 years before the industrial revolution, had fluctuated between 180ppm (when the Earth was in an ice age) to a maximum of 280ppm (in a warmer interglacial) period. Never in recent geological history and during the time in which humans have been on the Earth has the atmospheric CO2 concentration been as high as it is today.

What effects of climate change are being seen?

The effects of climate change are already being seen across the Earth. The IPPC reported in the 5th Assessment Report that since 1880 there has been an increase in average surface temperature of 0.85⁰C. This may seem like a small number compared to changes in daily temperature however to put it into comparison how small global temperature changes can have a large effect, if the Earth’s surface temperature was lowered by 5⁰C it would be in a full ice age.

Other changes currently being seen:

1. Increase in sea level (global sea level has increased by 0.19m between 1910 and 2010)
2. Increase in sea surface temperature (global average increase of 0.11⁰C between 1971 and 2010)
3. Reduction in sea ice (2016 saw the lowest winter sea ice ever recorded, beating the 2015 record)
4. Change in precipitation (Some areas of the Earth are becoming seeing more intense flooding while others are seeing severe droughts)
5. Change in El Nino intensity (As El Nino intensity is in part based on sea surface temperatures, rising temperatures will cause more intense El Ninos causing flooding, droughts, wild fires and famines.
6. Ocean Acidification (The acidity of the oceans has decreased by 0.1 on the pH scale since the beginning of the industrial era).

As the global temperature continues to increase, so will the severity of these changes.

In December 2015, the COP21 Climate Change conference produced the so-called Paris Agreement, a Global agreement between nations that aims to keep the rise in temperature to 1.5⁰C and to ensure that the temperature rise stays well below 2⁰C above preindustrial times. In order for this to be achieved, the global GHG emissions must be stabilised and then reduced.

We all need to play a part in reducing GHGs and there are many ways of doing this- and here’s how:-.

Will any of this make a Difference?

We are already experiencing the impact of climate change. Also the lives of our children and grandchildren and their experience of biodiversity and the environment are most likely to be change irrevocably.

Over recent times we have been able to successfully reverse the depletion of the protective ozone layer, principally by eradicating Chlorofluorocarbons (CFCs). It’s time to so the same for the Global Warming.

http://www.ipcc.ch/report/ar5/ - Read about the science of climate change, the impacts it will have and the mitigation strategies needed to reduce its effects. If you do not want to read the full report, the summary for policy makers is a shorter document which summarises all the main points.

http://newsroom.unfccc.int/ - Read about the Paris Agreement, see how many countries have ratified it and keep up to date on all news concerning climate change.

https://www.theccc.org.uk/ - Information on how the UK is adapting to climate change and how it is reducing its emissions.

https://www.theguardian.com/environment/climate-change - News stories updated daily about climate change and its effects around the world.

NOAA National Centers for Environmental information, (2020), Climate at a Glance: Global Time Series. Published: May 2020, retrieved on: 22 May 2020, from https://www.ncdc.noaa.gov/cag/